In which David Brooks embarrasses himself again… 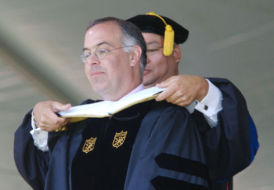 David Brooks came to visit us at the Shady Pines Home for the Violently Senile in about 2006. He was invited to give a little talk by the Chairman of our management board, Doctor Phelps. This was, of course, despite my strident objections.

His speech was going to be about “Living in the Future Tense” or some such tripe, which I though was a bit rich, given that he was speaking to a group of people who barely remember the past and present tenses, let alone the future subjunctive.

I was selected to meet-and-greet him, because I had been behaving myself that month. He didn’t seem to recognize me from that embarrassing incident many years before with Ayn Rand. His talk was the usual guff, and he struggled to be heard over the snoring.

Afterwards he was bailed up in the corner by Marge Albrechtson.

Now, Marge is quite doolally. In fact, she’s as mad as a fish. She thinks she is a chamber pot half the time and, I have to say, she’s slightly more coherent at those times. The rest of the day she just babbles a glossolalia mostly consisting of swear words interspersed with farting noises. She also has quite bad incontinence and refuses point blank to wear her Depends. I had been sneaking apple juice to her all morning in case of such an eventuality.

Sandra Frazer, Gloria Peters and I were guzzling all the free champagne at the buffet table and ignoring his frantic signals for one of us to rescue him.

Marge burbled away at Davey for at least half an hour before he managed to escape. He rushed up to us, wringing cold urine out of his trouser cuffs, and started to complain bitterly about being forced to listen to the senseless rantings of an incontinent loon.

At which point Sandra Frazer said, “Well, now you know how the rest of us felt.”

I did manage to slip some laxatives into his slice of Battenberg cake, which gave me some quiet satisfaction.