Flying fish eggs and a nice trip to the ballet 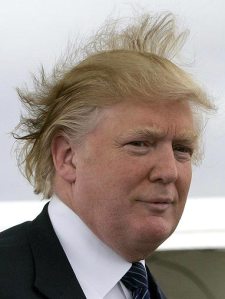 I’ve noticed that dreadful Donnie Trump all over the news, speculating about what I suspect will be the most successful Presidential campaign since Rudy Giuliani. Because most of the eighties is a bit of a blur, I have been trying to dislodge a little anecdote for a couple of days. This one finally came back to me during my afternoon nap, along with a rather cunning plan to send speed-laced brownies to Michele Bachmann.

Mary Anne Trump (or Bitsy, as we used to call her) was a friend of mine from way back. We first met just before WWII at some nightclub or another, where we were both on the prowl for eligible husbands. She caught a richer fish than me, I have to say, although I can’t complain.

Bitsy and I used to write to each other every week once we got married, and we’d always visit when there was a new baby or a christening or a funeral. I saw little Donnie get baptised – baldest, screamiest baby I’ve ever seen. He’d rip the dummy out of another baby’s mouth as soon as look at you, and then try to sell you his soiled nappy.

Bitsy and I didn’t see each other much during the sixties and seventies, what with all the moving around from tin-pot little African and South American nations that Keith and I did. International espionage is so hard on friendships.

Anyway, we got back in touch in the eighties, mainly by post again, but in about 1989 Bitsy wrote to me to tell me that she’d moved into Trump Tower to stay in Donnie’s place for a couple of months, and invited me to come visit.

Well, can I tell you that you have never seen anything like that apartment? It was like someone had paid Louis XIV to throw up all over a football field. Pink walls edged in gold leaf, gold tap fittings and smug pictures everywhere on the walls of Donald dressed up like Dionysus at a particularly drunken revel. It was a bit like living inside Liberace’s head.

Donnie and Ivana were feuding by that stage, of course. Bitsy told me that the fights had started almost from the beginning. I quite liked Ivana – she was a climber, of course, but quite lovely nonetheless.

It all came to a head one night at dinner. It was just the four of us seated at a dining table made for twenty. Donnie and Ivana were at either end, Bitsy and I in the middle, opposite each other, which was nice because we could chat and ignore the other two, who weren’t speaking anyway.

We’d just started on the Ossetra caviar when there was a yelp from Donnie like he’d been shot. We looked at him and saw that his eye was leaking black goo and he was clawing at it with his rubber-gloved fingers.

Ivana was sitting there grinning like a monkey with a spare handful of poo. She was holding her little bone caviar spoon in one hand and bending it back with the other. She flicked it and another spoonful arced along the table over our heads and hit Donnie right in the other eye, which kicked his head back and knocked his wig off, so it flapped behind his head like a dislodged fruit bat trying to get back into its tree.

He lurched out of his seat and headed for her with his arms outstretched, his hands clutching and his hairpiece flying, at which point she cackled like an extra on Charmed and let fly with a positive flurry of fish eggs. He kept trying to advance on her, but her aim was quite remarkable, and every time he got a few feet forward, she’d whop him in his face with another hit. When she ran out of caviar, she flung the spoon (getting him a good glancing blow on the ear that must have hurt like badly done buggery), then she just grabbed lemons out of a bowl on the table and pegged them at him.

The first one got him right in the middle of the forehead. The second and third ones got him right in the nuts, and he dropped onto the ground just behind me, wailing like three quarters of a cat, while Ivana followed up with the caviar bowl, a salt cellar and her mobile phone (which, if you remember what they were like in 1989, must have made quite a dent).

At that point, she stalked from the room and slammed the door.

When Bitsy and I finished our creme caramel, Donnie was slumped against the door burbling and crying that he just wanted his little Vanky-pops to love him and squeeze him and make him pay for doing the naughty things.

Bitsy and I had to step over him to get out.

Bitsy just sighed, and we went to see the premiere of Beethoven Romance by that nice Peter Martins at the Lincoln Centre, which was just lovely.