A post which contains various pieces of useful information, a welcome, an expression of gratitude and a brief but cruel reference to both Ronald Reagan and Ann Coulter 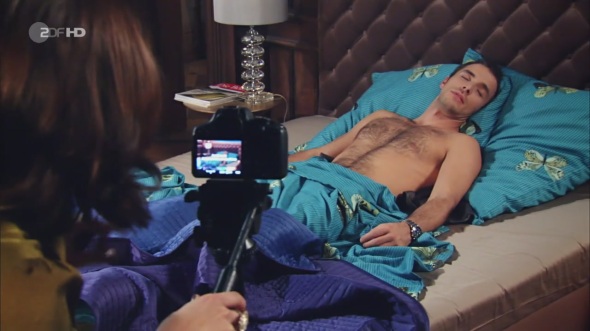 I breakfast quite late here at Shady Pines. My body clock is quite messed up from the Aripiprazole and Rivastigmine cocktail I’m supposed to take each morning with my first gimlet of the day and, besides that, if you arrive too early at the dining room you have to deal with the visual of 45 octo-nono-generians putting in their teeth and re-settling their colostomy bags while they chatter about Andre Rieu.

As such, I didn’t sit down to this morning’s fresh beluga, feta and egg-white omelette until at least midday. Marge Albrechtson was ranting about finding a squirrel in her laundry basket this morning. She usually keeps them in her chest of drawers, so she was most upset. After I had calmed her down with a swift finger-punch to the gut, I called up my blog statistics on my iPad 2 and noticed two or three new readers trickling in from something called the Daily Beast.

At first I thought that I’d cracked the satanist demographic, but after a little digging I worked out that that nice Andrew Sullivan had linked to my little blog.

Welcome to you all. We’re a little full up, what with the Daily Kos people sleeping on blow up beds in my lounge room and the Balloon-Juice people camped out in the Games Room (whist on Tuesdays, cribbage on Wednesdays and Fridays and polo on every second Thursday afternoon), so some of you are going to have to bunk in with Marge. Don’t worry – her bed has both a waterproof sheet and arm restraints, so you should be safe enough.

* Watch out for any baked goods which don’t have a little green flag stuck in them. I cannot emphasize this more strenuously. Ann Coulter took a slice of tryptamine-laced Battenberg cake out of the fridge the other day even though it was clearly marked with a RED flag, and spent 48 hours babbling away like Ronald Reagan – “The twilight years”. In other words, we could barely notice the difference, but YMMV.

* Don’t get between Marge and any member of the order Rodentia, or between me and any ethanol based liquid.

* Finally, don’t touch my medication drawer or I’ll cut you.

I’d like to say a thankyou to Andrew for his kind words, because I’m a nice (if wicked) and well-bred old lady. Grammy likes words like “mordantly funny“, “hilarious” and “inspired” almost as much as she likes the words “massage“, “2-for-one sale at Prada bespoke“, and “3,4-Methylenedioxymethamphetamine“.

By the by, I also agree with Jasper Fforde that “shevelled” and “gruntled” are both sadly neglected words, and use them at every opportunity. Get used to it.

Just two little quibbles with Andrew’s post – I’m not so much Dada as gaga (I refer to the slang term for senility, not the skinny bint in the dress made of cheese and dog vomit), and anyone who suggests I am an “alleged” 92-year old grandma is asking to feel the back of my hand.

Anyhow, thank you Andrew. I take back all of the nasty things I have ever said about you, except the quips in this article here, because it’s really more nasty to Megan McArdle than anything else and frankly I think its pretty funny.

From tomorrow, however, all bets are off, beardy.

Moving on. I was most amused to read the chat thread on the Reddit mention of my recent Trump post where some very silly people were trying to argue that Donald’s Mexican birth certificate was a fake on such spurious grounds as that it was issued by the long-dead and little-missed Emperor of Mexico.

Pedants. I’m a Republican, Catholic woman – would I lie about anything?

Finally, the pace of writing and posting and clicking those fucking Facebook notifications over the last couple of days has been frenetic and has worn me out a little, plus I do need to maintain my active social life, so I’m going to go on a little visit to New York to see Gloria V. for Easter. We’re going to go and see “Atlas Shrugged” and throw Medicare-subsidized cancer medication at the screen. We may even cram in a little visit to a strip club with dear old Barbie Bush.

As such, posting may be a little sporadic over the next few days, unless Grammy gets hepped up on crystal and wants to rant a little bit.

Regardless, I hope you will check back in soon. I have a nice little story about Ronnie Reagan in the pipeline, and have promised dear AsiangrrlMN that I’ll post it as soon as my head clears. I’m also having memory-flashes of Fidel Castro in a bathing suit brandishing an egg whisk, which is odd because while I do remember him smelling a bit like a sheep when he had his shirt off, I don’t recall an egg whisk ever coming into the proceedings. Anyway, there could be a story in that too.

Stay safe and play nice, dears, and I will speak to you all soon.

12 Comments on “A post which contains various pieces of useful information, a welcome, an expression of gratitude and a brief but cruel reference to both Ronald Reagan and Ann Coulter”