What I learned from The Corner today – An occasional series

Warning: Many links are to Kathryn Jean’s Fluffy Pink Womb of Zygote Love. 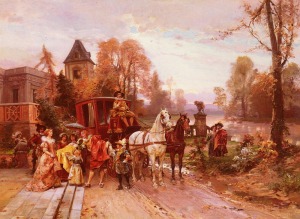 Kathryn Jean thinks that Mitt Romney is a man of principle because he vetoed a section of legislation which would have required all Massachusetts hospitals, including Catholic ones, to provide emergency contraception to rape victims – or as she puts it:

thus managing both to include the word “abortifacient” and entirely exclude the words “emergency”, “rape” and “victim” – even though Romney vetoed it for entirely political reasons, knew at the time his veto would be overturned, even said that “in his heart of hearts,” he believed that rape victims should have access to emergency contraception, but now believes that a similar rule “tramples on religious freedom”.

President Obama, on the other hand, is a big scary blah man who wants to take away, in turn, our liberties, our virginal innocence and the little blah babies he fathered upon us with his heathen lusts.

Also, Kathryn Jean is preparing for the inevitable day when she will need to snuggle up next to Mitt’s special undies and worship at the temple of the Mitt. I bet Mitt’s pubic hair looks just like the hair on his head.

Also, defunding Planned Parenthood was a “business choice“. Italics in the original.

The “Editors” think that Susan G. Komen for the Cure is (or at least was, and probably still is) an organisation of principle because Planned Parenthood doesn’t do mammograms, all they do is do breast checks and refer people for mammograms. So there. After all, finding out how to check your own breasts and then obtaining a referral to a mammogram clinic when you find a lump is easy-peasy when you are poor and/or illiterate and/or don’t have insurance. I think they offer them at McDonalds, with a side of fries and a free home pap smear kit. Besides, this is great because it lets us talk about abortions some more and donate our usual three bucks a month to a charity that doesn’t fund child murder and then feel smug about it.

The fact that Victor Davis Hanson – writing about President Obama appealing to black people – wrote the following sentence without being blasted into smoldering scoriae is proof that there is no God:

The strategy may have always been implicit, but I cannot quite remember a president or presidential candidate explicitly trying to rally a constituency on the basis of shared racial identity — except for Obama’s earlier appeals to Latinos to “punish our enemies” and his 2010 midterm video targeting specific special minority groups to get out and vote.

Sorry. I seem to have had some bile stuck in my throat. Victor should, at the very least, have been afflicted with boils for that weaselly “explicitly” up there.

Just like me, Mark Krikorian thinks Ron Paul is a mouth-dribbling wackaloon, except for Mark it’s because Ron Paul is a closet lefty who doesn’t hate brown people and wants to give them lollipops instead of shooting them.

(For the uninitiated, Gawker’s imperative role on the Internet is that of the mother bird, partially digesting the work of others with the enzymes of bored irony and the gastric juices of sarcasm, and regurgitating stub articles fit for the consumption of the shrieking, featherless hatchlings that comprise my doomed generation.)

Donald Trump is either tripping on some hellishly good painkillers or stark bugfuck mad. Or both, I suppose.

What the Poor Need is a Fucking Trampoline.

Jesus. I what I need is a drink and some kind of pills. The green ones, I think.