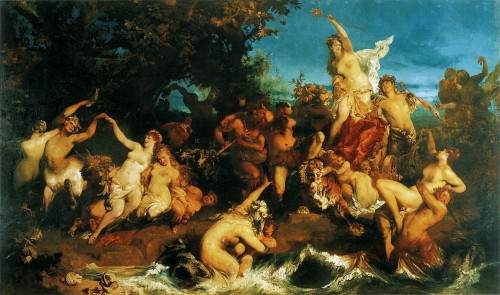 Well, my dears, I’m back from my little jaunt over to London for Betty Windsor’s Jubilee.

I haven’t seen that much mindless fawning and avid slobbering over one woman since the time I got stuck in a lift with Megan McArdle and Tina Brown. Mind you, that was only about three weeks ago, so it’s been quite a month for the brown-nosing.

I did enjoy the Jubilee flotilla. I was delighted to be invited onto the Royal Barge (although I was confused for a while because that’s what Phillip always used to call Fergie).

However, after a few glasses of bubbly and half an hour listening to Kate wittering on about how big her castle is, I did consider taking a fire axe to the bottom of the boat and drowning the whole bloody lot of them (except Harry, of course, who is such a dear and who hooked me up with some smashing coke (but then the sweet thing doesn’t have a Saxe-Coburg gene anywhere in his little ginger body)).

Thankfully I was distracted by a lustful look from a particularly dishy Gurkha, so a major international diplomatic incident was averted for the time being.

Anyway, I arrived back at Shady Pines to find that the righties at the Corner have been smoking the post-Wisconsin crack pipe and worked themselves up into jittery, pock-marked frenzy and are now wandering the streets muttering Halperin quotes:

in between trying to cadge subscriptions from the punters so Kathryn Jean can buy her own blow-up Timothy Dolan doll.

Nooners, never one to turn down a passing bandwagon (particularly if it has a Smirnoff logo on the side), is actively crowing about how Obama has lost the election six months out because he doesn’t lie and dissemble like his opponent. I shit you not:

Mr. Obama has become actively bad at politics. Here is an example of how bad. Anyone good at politics does not pick a fight with the Catholic Church during a presidential year. Really, you just don’t. Because there’s about 75 million Catholics in America, and the half of them who go to church will get mad. The other half won’t like it either.

If you’re good at politics, you quietly allow the church what it needs to survive, which actually is no more or less than what’s long been provided by the U.S. Constitution.

If you’re good at politics but ideologically mean, you string the church along throughout the election year, offering “temporary full waivers” or some such idiotic phrase—politicians love to make up idiotic phrases—on conscience, and then revoke all protections in 2013, after you’ve been re-elected, and have the fight then.

Even worse, Obama is apparently a loser because he’s attacking his opponent:

A more important example, and then we’ll move on. The president opened his campaign with a full-fledged assault on his opponent. This is a bad sign in an incumbent! An incumbent should begin his campaign with a full-fledged assertion of the excellence of his administration—the progress that has been made, the trouble that has been avoided, the promise that endures. You’ve got to be able to name these things. Then, once you’ve established the larger meaning of your administration—with wit and humor, and in a tone that assumes fair minded Americans will see it your way—you turn, in late summer, to a happy, spirited assault on the poor, confused, benighted and yet ultimately dangerous man running against you.

All of which means, in the warm haze of Nooners’ post-Wisconsin bender, that

The Obama administration suddenly looks like a house of cards.

The collective Tarantos are also excited. You can almost see the desperation oozing off the page as they try to paint Wisconsin as the penultimate victory in a string of Republican triumphs, which will culminate in the crowning of King Mitt in January.

To be sure, it’s possible that Obama will stage a comeback and defeat Mitt Romney. Only time will tell. But it’s not as if time took a vow of silence in January 2009. The other day Commentary’s John Steele Gordon provided a helpful list of events that “sure looks like a trend to me”: the emergence of the Tea Party in early 2009 and the town-hall confrontations that summer, Republican victories in New Jersey’s and Virginia’s governor races in November 2009, Scott Brown’s upset in January 2010, the Republican landslide in November 2010, and Walker’s vindication Tuesday, along with the approval of ballot measures curtailing public-sector pensions in California’s second- and third-largest cities. …

“If Republican Mitt Romney is inaugurated as president in January, history may look to June as the month in which President Obama’s fate was sealed,” writes National Journal’s Reid Wilson. If so, we would argue history will be wrong. The crucial month was March 2010, when ObamaCare became law. Obama’s determination to push it through despite overwhelming public opposition was the apotheosis of his contemptuous approach to governing. Pundits who took until this week to notice that Obama is out of touch were themselves out of touch.

Now, I know there are no sure things in politics, and the stupidity and self-destructiveness of a major part of the American electorate is never to be underestimated.

Nonetheless, I think Obama is going to win and win handily.

The more the electorate sees Willard, the more they will dislike him (particularly that part of the electorate which is brown or gay or has a vagina and/or something functioning above the level of their brainstem). The debates are going to be more of a disaster for the Republicans than that time when Uncle Cranky McCain wandered around the stage looking for his doggy mid-debate.

My money’s on the smart black guy that most of the country likes, rather than the dull, awkward, unpleasant, unprincipled trull who thinks that cops, firefighters and teachers are parasites holding back the American economy.

2 Comments on “Bookmark it libs”