Readin’ and Watchin’ and Drinkin’

It seems like we haven’t had a book post in a while, dears. I certainly have a backlog of books to tell you about. First, however, some music to get you in the mood. How about the wonderful Wasting My Young Years, from London Grammar…

I’ve just finished The Days of Anna Madrigal, by Armistead Maupin. This is the ninth book in Maupin’s Tales of the City series. If you haven’t had the pleasure of Mr Maupin’s tales, then this isn’t the book for you, and you should immediately hie yourself to a bookstore and begin at the beginning, where all good stories start, back with Mouse and Brian in the popper and dope-smoke fug of the sexy seventies. If you have been following along then, happily, The Days of Anna Madrigal is a triumph. Anna may be 92, but she still likes a toke and a dance (honestly, who thinks of these things?), and her swansong is a gentle, bittersweet trip into the past and present for Maupin’s finest creation.

I’m making my way through Greg Ross’ Futility Closet. Subtitled “An Idler’s Miscellany of Compendious Amusements”, this book is a joy, not least for its … well, compendious (and fully hyperlinked) index, a masterpiece of the form which contains such gems as:

Also well worth your time are Alastair Reynolds’ Blue Remembered Earth, a sprawling, operatic romp that rockets all over our solar system and beyond, and his Doctor Who novel, Harvest of Time, which brings Roger Delgado’s Master thrillingly back to life while (importantly) making sure the character is still just a tiny little bit crap.

If you like police procedurals and have a taste for ghosts and gods and monsters, then have a look at Ben Aaronovich’s Rivers of London series. Aaronovich’s London is perfectly evoked, and his characters get down and very dirty in the tunnels that lie beneath that stinking shithole of a city. (Thanks Tom!)

If tentacles and forebodings of doom are more your thing, then I heartily recommend Innsmouth Magazine – a thrice yearly collection of Lovecraftian tales.

TV-wise, I confess that I have been making heavy use of my AppleTV to keep myself sane until Game of Thrones and Broadchurch return, mainly because Australian television is far worse than you can imagine – a heady mishmash of bogans cooking, yellow people having their luggage searched, footballers in blackface, and current affairs shows that make Murdering Joe look like Edward R. Murrow.

I particularly enjoyed Utopia. Starring, amongst others, James Fox, Stephen Rea and the luscious Geraldine James, Utopia tells the story of a group of geeks who discover a global conspiracy hidden in the pages of a lost graphic novel. It’s incredibly, graphically violent, and beautifully shot in vibrant reds and greens. Best of all, it pays off every story thread in six taut, tight episodes. See it before some American remakes it and sucks all the pleasure out of it. 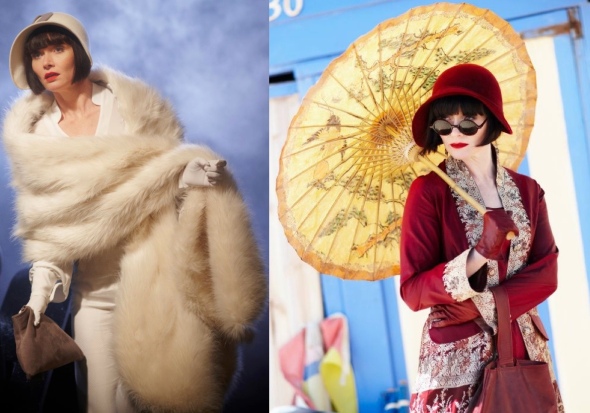 I love a bit of murder and a good frocking, and so I have been making my way through both Miss Fisher’s Murder Mysteries and Ripper Street.

The first is an adaptation of Kerry Greenwood’s Phryne Fisher mysteries that lovingly recreates Melbourne between the World Wars, with lashings and lashings of blood, handsome policemen, shameless (but tastefully shot) rumpy-pumpy and the most gorgeous costumes you’re likely to see anywhere. It’s the kind of thing for which the term “frippery” might well have been coined – a glittering jewel to behold.

Finally, Ripper Street. Set in Whitechapel in the aftermath of the Ripper murders, this series doesn’t flinch from the muck, poverty and corruption of Victorian London. Matthew Macfadyen is perfectly stoic as the head of a fine cast, but for my money it’s Jerome Flynn’s magnificent turn as the lovelorn bruiser Sergeant Drake that steals the show.

So, what else should we be reading and watching?

I haven’t posted for a while. Life has been a little complex. Not least, my father (I’m 93, so you can imagine how old he is) fell and tore the quadriceps ligaments in both his legs and is in hospital unable to walk, so I have been dealing with the fallout of that.

However, I need to come out of my temporary exile to remind you that, in addition to some kind of Presidential election, Tuesday also brings votes on gay rights in Minnesota, Maryland, Washington and Maine. Gay rights are human rights, so get out and vote.

I’ll leave the bulk of this post to Chris Kluwe, who becomes sexier and angrier and more erudite with every day. Here he is, with his final posting at the blog of the St. Paul Pioneer Press, condemning the paper’s editorial which claimed to present a neutral view of both sides of the marriage amendment, and railing against lies and bigotry, with the gnashing of the teeth and the lamentation of the women. It is indeed righteous.

How does this piece lie? It lies in statistics. “Some argue that as a practical matter there seems to be less interest by same-sex partners in actually being married than in redefining what marriage is. In Iowa, for instance, Wikipedia reports, that only 815 same-sex couples married in the first year after legalization.” It’s unfortunate that the editorial board does not comment on the fact that the actual link in the Wiki article leads to a page not found.

This is not journalism. This is cherrypicking “facts” you hope no one has the inclination to look up, because if one looks up the actual facts one would see that 815 marriages equates to 20% of the same-sex couples in Iowa choosing to marry that first year, a not insignificant amount. If one looks up actual facts, one would find that 13.6% of all marriages in Iowa in 2010 were same-sex marriages, another not insignificant amount when you consider the gay population of the United States is estimated at only 3.5%.

How does this piece lie? It lies in every mealy mouthed, “Love may be love, but even now there are any number of prohibitions around marriage between consenting (heterosexual) adults.” Name them. Oh that’s right, you didn’t. It lies in every five sentence vote yes argument compared to a one or two sentence vote no stance. It lies by juxtaposing “It is a decision both about what the definition of marriage should be, whether it is about children and the biological family or about consenting adults”, as if gay parents can’t raise children as well and all they want is to have sex with each other.

How does the piece lie? It lies, oh how it lies, when it talks about supporters of traditional marriage being bullied, being painted as victims, weeping and moaning about the “members of the (vote no) movement are aggressive”, wailing and gnashing teeth over “For those who hold traditional beliefs about marriage, increasingly the force of law will be brought to bear on matters of education, speech, and practice”; all the while not mentioning a single gay person denied THEIR right to be treated as a human being, silent on the issue of gay children bullied in school, completely quiet about a gay support group forbidden to march in Anoka.

How does this piece lie? It lies, most simply, in this sentence, “the Pioneer Press is not endorsing one way or another.”

You have made your endorsement, gentlemen. You chose your side. What you did not choose, what you refused to face, was the courage to stand for your convictions, to attach your names to the position your actions claimed. That is why I will no longer associate with you, why I decline to give you page views and ad revenue any longer. The only reason I’m posting this piece here, and not somewhere else, is because I said I would, and I believe that one’s word is not something to be given lightly.

I will not stand for the continual eroding of society. I will not tolerate the presentation of a biased argument under a thin coat of presumed neutrality. I will not contribute to the cheapening of discourse and thought that decays every single news as entertainment outlet in this country. I absolutely will not compromise my ethics and morality, ideals that lead me to treat others with empathy and honesty, to demand truth not only from myself but from those around me.

I reject you, and I encourage others to do the same – to you, and to all others like you. To those who perpetrate deception and fraud. To those willing to hide the truth of their beliefs. To those who value flash over substance, short term gains over long term consequences.

Without honesty, we have nothing.

Girls, we do whatever it will take

I’m not writing about the election until the next time Romney opens his mouth and says something stupid (which could be ten minutes from now, so you never know). A book thread (along with physics puzzler), a foodporn thread and a realporn thread are on their way.

How goes it with you all?

Oh, and eye candy for your Friday night: